According to the results, it can be concluded that feeding hydroponic sprouts to lactating cows increased the digestibility of nutrients and milk production leading to increase in net profit.,

Effect of feeding hydroponics maize fodder on digestibility of nutrients and milk production in lactating cows.

Conclusion:  It can be concluded that feeding of HMF to lactating cows increased the digestibility of nutrients and milk production leading to increase in net profit.

Competing Interest: The author has declared that no competing interest exists.

Green fodder is an essential component of the dairy ration, otherwise the productive and reproductive performance of the dairy animals is adversely affected. Therefore, for a sustainable dairy farming, quality green fodder should be fed regularly to the dairy animals (Naik et al. 2012a). However, the major constraints in production of green fodder by dairy farmers are unavailability of land for fodder cultivation due to small land holding size, scarcity of water or saline water, labour required for cultivation (sowing, earthing up, weeding, harvesting etc.), requirement of manure and fertilizer, more growth time (approx. 45–60 days), fencing to prevent fodder crops from wild animals and natural calamities etc. Further, the non-availability of quality fodders round the year aggravates the constraints of the sustainable dairy farming (Naik et al. 2013a). Due to the above constraints in the conventional method of fodder cultivation, hydroponics technology is coming up as an alternative to grow fodder for farm animals (Sneath and Mclntosh 2003, Naik et al. 2011a, Naik et al. 2012b, Naik et al. 2013b). However, only a few reports are available on the feeding value of the hydroponics green fodder to dairy animals in India (Reddy et al. 1988, Pandey and Pathak 1991). Therefore, an experiment was conducted to find out the effect of feeding hydroponics maize fodder on digestibility of nutrients and milk production in lactating cows.

Production of hydroponics maize fodder: Hydroponics fodder maize was produced in a hydroponics chamber measuring about 25 ft × 10 ft × 10 ft with a daily production potential of 600 kg fresh hydroponics maize fodder and equipped with automatic sprayer irrigation of tap water. Clean seeds of maize (Zea mays) were soaked in tap water for 4 h and were then distributed in the greenhouse trays with a seed rate of 7.6 kg/ m2. On first day, the trays containing the soaked seeds are put on the top most rows of the rack and then every day these are shifted to their respective below rows till they reach the down last row on seventh day. Inside the green house, the plants are allowed to grow for 7 days and then on eighth day, these are harvested and fed to the dairy animals.

Digestion trial: At the end of the feeding period, a 6-d digestion trial was conducted on all experimental animals. During the digestion trial, the feeding schedule of the animals remained the same as earlier. The feed residues after 24 h consumption of each animal were weighed to determine the daily feed intake. Faeces were collected quantitatively from the animals immediately after defecation.

Recording of data and analytical procedures: The feed offered and residues left were recorded daily. The body weight changes of the experimental animals were recorded at fortnight intervals. The daily (morning and evening) milk yield of the animals was recorded and the feed conversion ratio was calculated as ‘kg intake per kg milk production per day’. The feeds and fodder offered were analyzed for proximate principles (AOAC 2000). The data were analyzed statistically for the test of significance (Snedecor and Cochran 1994).

Chemical compositions of feeds and fodder: The nutrient contents of the concentrate mixture is as per the BIS specifications of the compounded cattle feed (Table 1). The compositions of the conventional NBH (CO-3) green fodder and jowar straw were within the normal range and similar to the reports of the earlier workers (Naik et al. 2013c). The HMF looked like a mat of 20–30cm height consisting of germinated seeds embedded in their white roots and green shoots (Naik et al. 2011a, Naik et al. 2013b). The increase in weight of the hydroponics maize fodder than the seed weight on fresh basis was 5.5 folds. The DM content (on fresh basis) of the hydroponics maize fodder was slightly higher than the conventional CO-3 green fodder and the hydroponics barley fodder reported by Reddy et al. (1988). However, Dung et al. (2010b) observed 3.7 times increase in the fresh weight of the 7-d hydroponics barley fodder with DM% of 19.7%. According to Sneath and Mclntosh (2003), various commercial hydroponics fodder producers claims yields of 6–10 times with DM% from 6.4–20; while trial yields range from 5–8 folds. Naik and Singh (2013) reported that yields of 5–6 folds on fresh basis (1 kg seed produces 5–6 kg HMF) and DM content of 11–14% are common for HMF; however, sometimes the DM content up to 18.3% was observed as in the present study. The hydroponics maize fodder had higher CP, EE, NFE and lower CF, TA and AIA percentage than the napier bajra hybrid (CO-3) green fodder. Earlier, Naik et al. (2012b) also reported higher CP, EE and NFE; and lower CF, TA and AIA percentage in hydroponics maize fodder than the conventional maize fodder. In hydroponically produced barley fodder, CP content of 16.3% (Snow et al. 2008) and 14% (AI-Ajmi et al. 2009) were reported by the earlier workers. Sneath and Mclntosh (2003) reviewed the composition of sprouted barley and reported that the CP ranged from 11.38 to 24.9%. As per Pandey and Pathak (1991), the artificially grown barley fodder had 14.69% CP, 3.18% EE and 78.55% total carbohydrate. Similarly, Reddy et al. (1988) observed 13.72% CP, 16.33% CF, 3.72% EE, 62.12% NFE and 0.17% Ca and 0.48% P in the artificially grown barley fodder and concluded that it was superior to certain common non-leguminous fodders, but comparable to leguminous fodders.

There was 13.7% increase in the milk yield of T-HF group than the T-CF group due to feeding of hydroponics maize fodder, which may be due to the higher DCP and TDN content of the ration (Table 3). Similar to this experiment, an increase of 7.8% in milk production was observed in cows fed ration containing hydroponics barley fodder (Reddy et al. 1988). The feed conversion ratio (FCR) in terms of DM, CP and TDN was better in the T-HF group than the T-CF group. It is reported that the hydroponic sprouts are rich source of nutrients and contain a grass juice factor that improves the performance of livestock (Finney 1982). The DM required per kg milk production also reduced by 11.6% on the ration containing artificially grown fodder (Reddy et al. 1988). Pandey and Pathak (1991) fed artificially grown barley fodder ad lib. to lactating crossbred cows and concluded that the mean daily intake of CP, DCP and TDN are higher than the maintenance requirement, but lower than the total requirement for maintenance and milk production; therefore, for maintenance, hydroponics barley fodder should be fed; but for high yielding cows, supplementation of adequate quantity of concentrate is necessary. The cost of the feed/d (P<0.05) and feed cost per kg milk production (P>0.05) was higher in the T-HF group ( ₹144.88 and Rs. 34.98) than the T-CF group ( ₹137.51 and  ₹33.69). The higher cost of the hydroponics maize fodder ( ₹4/kg) than the conventional green fodder ( ₹1.50/kg) might be the reason for the higher cost of the feed in the T-HF group than the T-CF group (Naik et al. 2012c). The cost of milk increased non-significantly (P>0.05) in the T-HF group ( ₹166.92) vs than the T-CF ( ₹146.88) group, which led to the higher net profit of  ₹12.67/ cow per day due to feeding of hydroponics maize fodder. Reddy et al. (1988) also reported that the cost of feed per kg milk production increased by 20% on the ration containing artificially grown fodder; but in spite of the cost variations, it was concluded that being superior fodder than NB-21, it could be a good feed component of high yielding cows stationed in hilly areas. A farmer at Mandrem village in Pernem Taluka of Goa also observed that on daily feeding of 10 kg hydroponics fodder maize per cow, 1.0 kg concentrate mixture per cow per day was saved and experienced enhancement of approximately 1.0 litre (from 8 litres to 9 litres) milk per cow per day, earning additional net profit of  ₹10/ cow/ day (Anonymous 2012). 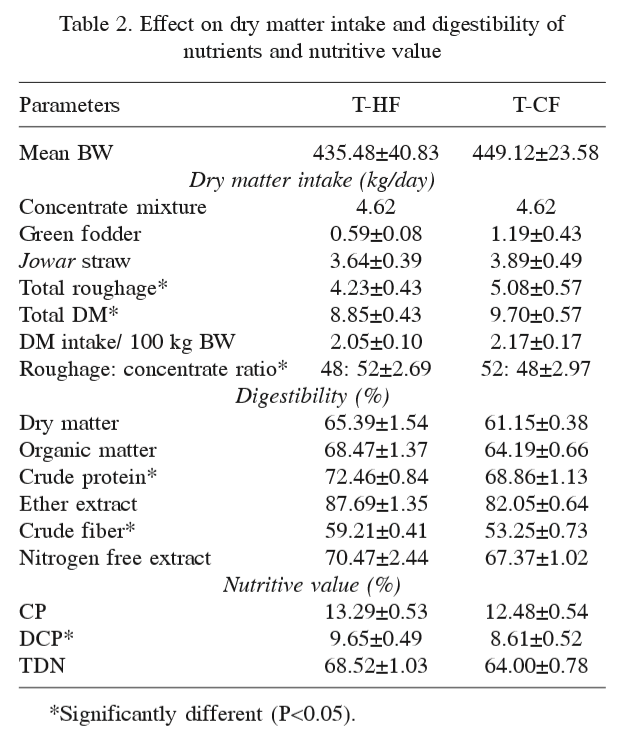 It can be concluded that feeding of hydroponics maize fodder increased the digestibility of nutrients, milk production and net profit in lactating cows.