In this experiment, daily weight gain of 20 Droughtmaster steers, 15-18 months of age, fed hydroponically sprouted barley shoots and hay on ‘Lyndon’ Station in the Gascoyne/Pilbara region of Western Australia was measured. 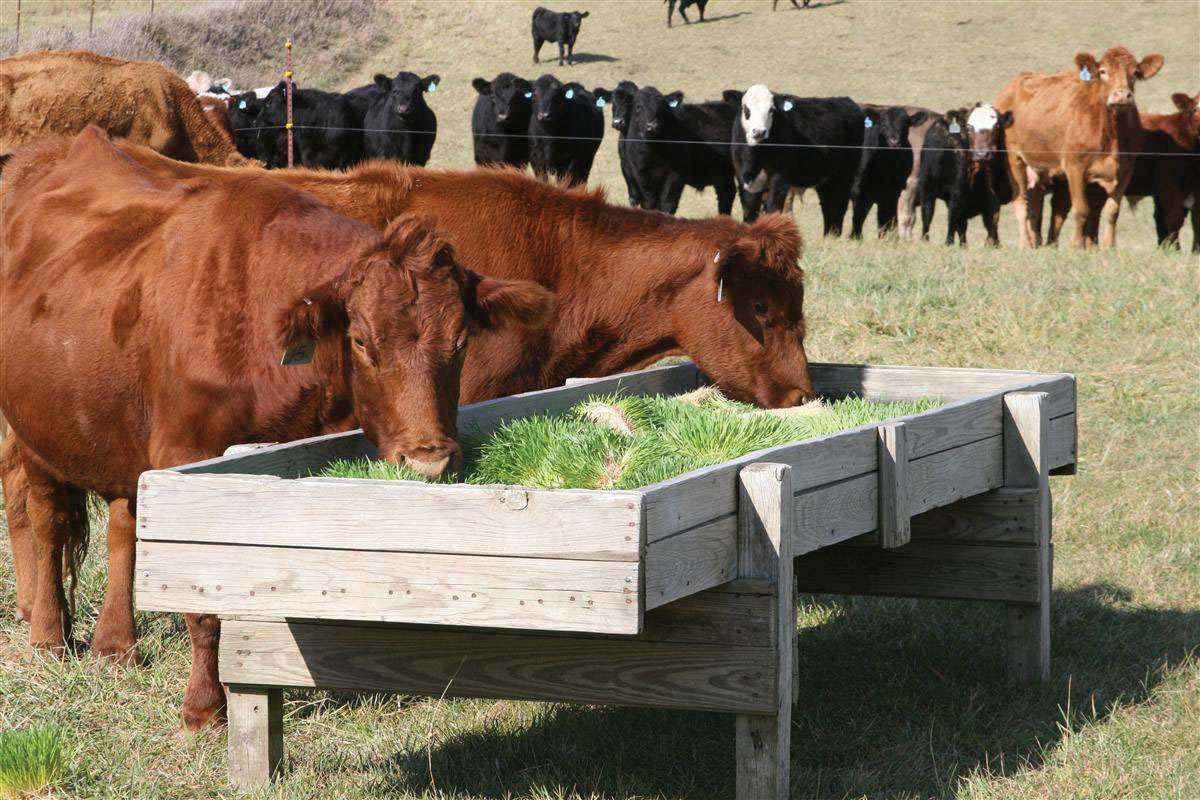 The concept of using hydroponically sprouted cereal grain as nutritious fodder is not new (Leitch1939, cited by Peer and Leeson 1985). Sprouting in grain is associated with losses in dry matter (DM) and increases in crude protein concentration. Hydroponic fodder is nutritious, but the high moisture content, 84-91%, significantly reduces the concentrations of energy or protein in the feed on an ‘as fed’ basis. When ‘converts’ talk about the benefits, they do not consider DM content.

Daily gain of 20 Droughtmaster steers, 15-18 months of age, fed hydroponically sprouted barley shoots and hay on ‘Lyndon’ Station (115o3′ E, 23o6′ S) in the Gascoyne/Pilbara region of Western Australia was measured. The cattle grazed the native and improved pasture on the property prior to them being introduced to the hydroponically sprouted barley (hydroponic fodder) and some hay 4 days before starting the trial. The hydroponic fodder was grown in fibreglass trays held in racks in a specifically constructed shed. About 14kg of barley seed (v. Mundah) was spread on each tray which was intermittently flood irrigated with a nutrient solution. The young sprouted barley, which grew into a grass mat, was harvested at 6 – 7days and fed daily to the animals. The average weight of each grass mat was 71.5 kg. Cattle were fed the hydroponic fodder each day and hay, either limited (48 days) or ad lib (22 days), every 2nd day, plus the day before the animals were weighed. The cattle were weighed weekly at about the same time each morning. Hydroponic fodder and hay samples collected during the feeding period were analysed for DM, metabolizable energy and crude protein concentration.

Traditional nutritional standards for feeding beef cattle cannot explain the live weight gain, particularly in the 1st period (Table 1). There was no obvious weight gain due to gut fill or compensatory growth. The better-than-expected performance may be associated with the readily available nutrients and associated enzymes in the 6-7 day old fodder being very rapidly utilised by the animal, immediately as they are formed. They may not be included by the assay when in vitro DM digestibility is being measured. These nutrients could result in enhanced microbial activity and growth in the rumen, and consequently, better than expected utilisation of the poor quality hay that was also fed. Therefore, the fermentation of the young hydroponically sprouted barley may have provided far greater energy than was estimated by the in vitro DM digestibility assay.