The production of hydroponic fodder based on new technology provided animals with a high-quality supplement with high protein and energy value. Its use significantly improves the quality of the diet and the resulting milk. In addition it makes it possible to solve the problem of animal health, especially in farms that use highly productive breeds and reduces the cost of fodder. 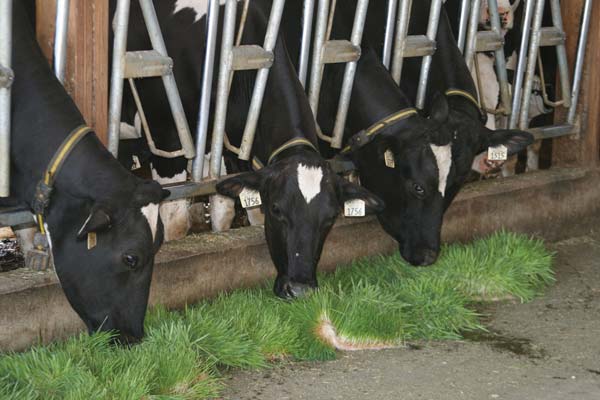 This paper examines the development of a fundamentally new automated hydroponic system for growing green fodder, which creates a solid fodder base capable to satisfy the need of livestock for nutrients throughout the year with low material costs. The new hydroponic green fodder produced according to the developed technology contained the required nutrients that contribute to the digestion of proteins, fats and carbohydrates into easily digestible organic components (amino acids, fatty acids and simple sugars) which are simpler in their structure. Moreover, it completely replaced compound feed, a mineral supplement in the diet of milking cows, and reduced the amount of fodder needed. In dry matter, compared to fodder barley, the content of protein (128.93%) and fat (196.73%) were higher, and biologically active substances were also formed. The new fodder used the nutrients of the diet more efficiently, increased milk production and reduced fodder costs. When hydroponic green fodder from barley was introduced into the diet of cows with 100% replacement of the compound fodder and 50% replacement of grain mass, milk yield in the experimental group exceeded the yield in the control group by 6%. An additional 549.5 kg was obtained from each cow for lactation, and 549.5 × 20 = 10990 kg was obtained from the entire experimental group.

In modern dairy farming it is extremely important to assess a nutritious diet that can satisfy the need of livestock for nutrients that stimulate the productivity of animals. Moreover, the diet should have a positive effect on the physiological and immune status, reproductive ability and productive longevity of highly productive cows, especially the Holstein breed and its genotypes. [1,2.3]

In this regard, it became necessary to revise the production principles of fodder and both quantitative and qualitative improvement of fodder supply. At the same time, the priority issues include the reduction of the loss of nutrients in fodder based on the use of advanced technologies for feeding.

In the course of our scientific research we revealed a new promising direction for the use of sprout grain in feeding of dairy cattle. During the germination of grain under the influence of enzymes, decomposition of complex organic substances of seeds occurs i.e. proteins decompose to amino acids, polysaccharides to monosaccharides, fats to fatty acids and hydroxy acids [4,5,6,7,8,9].

The modular hydroponic unit is designed for year-round, daily production of high-quality, cheap, environmentally friendly, natural protein-vitamin-mineral supplements, regardless of the season, weather and climatic conditions.

Green fodder was grown from barley seeds, the norm per 1 m2 of pallet barley was 4.2 kg. For this purpose, we used pure barley grain with a germination rate of 90%.

The hydroponic method of growing green fodder involved preparation, germination of grain and green fodder growing. Weighed dry grain was placed in trays and irradiated with a mercury-quartz bactericidal lamp for 3-10 min (depending on lamp power).
The ultraviolet rays of the lamp destroyed bacteria and germs of fungi on the surface of the grain and prevented putrefactive processes.

After irradiation, the grain was soaked in water for 10-15 minutes. After the expiration date, the water was drained, the trays were covered with glass, leaving a gap of 1-2 cm wide, and placed on germination. The grain was germinated for 2 days, maintaining a certain humidity and temperature. The optimum temperature for oats germination was 21-23 ° C. [10,11,12].

During the process of germination, it was recommended to inspect the trays at least 2 times a day and, if there was a lack of moisture, it was necessary to moisten the grain, and if there was an excess, we should drain the water. After the sprouts appeared in most of the seeds, the coverings were removed and the trays were placed on cultivation. From this moment the plants were receiving light and nourishment.

For the cultivation of green fodder, fluorescent and white lamps were used. Under the influence of water, heat and light, in the process of photosynthesis, the storage carbohydrate (starch) of cereals was converted into easily absorbed forms, which were necessary and sufficient material for glucose synthesis. [4,10,11,13]

According to the experiments the more intensive accumulation of nutrients and vitamins in plants occurs when they are illuminated for 18 hours a day. Ready-to-eat green fodder is grass with a height of 10-15 cm.

If necessary, green fodder can be grown from seeds of cereals and legumes by straw or grass cutting for 7-8 days. Such food consists of pieces of mat woven by a root system with green shoots. The thickness of the mat depends on the amount of straw cut used when setting the planting stock.

The hydroponic method allows obtaining from 5 to 12 kg of green fodder from each kilogram of dry grain of cereals and legumes or their mixture.

The primary characteristic of the nutritional value of a fodder is its chemical composition.

As a result of a comparative assessment of the nutritional value of hydroponics of green fodder, fodder barley, complete fodder for dairy cows (KK-60) and fattening of cattle in the stall period (KK-65), we found that hydroponic fodder exceeded the content of nutrients, vitamins and useful minerals [2,9,13].

In order to assess the nutritional value and methods of the use of new green fodder produced from barley, we carried out comprehensive studies on dairy cows of Holstein Friesian cattle in the breeding farm “Polyany” of Vyborg district of Leningrad region. For this purpose, cows were selected according to the principle of paired analogs in the amount of 20 heads in each group after the second calving (daily milk yield was 30 kg). All of them had a live weight of 600 kg and were increasing the milk yield.

All the experimental groups of animals were clinically healthy and were freely kept in the same conditions. The cows were fed twice a day.

During the development of the diet, physiological characteristics of the fore stomachs of ruminants were taken into account and the special fodder were selected which in its quantity and combination ensured the creation of the most favourable conditions for the vital activity of rumen microorganisms, as well as the cost indicators of the daily intake of feed per 1 head.

Our research showed that proteins in hydroponic green fodder (HGF) had a number of other positive properties. Its cost was significantly lower compared to compound fodder.

Therefore, we made an attempt to replace compound fodder in the diet of milked cows for protein equivalent (HGF) and to study how this replacement affects productivity and nutrient use. The diet of the control group consisted of herb hay, herb and cereal-clover silage, concentrated fodder which together with the premix was fed in the form of compound fodder (10 kg / head. KK 60-19.6 SP), crushed corn (3 kg / head), sunflower cake (2kg / head), crimped barley grain (2kg / head) and mineral supplement (200g / head).

The diet of the experimental group consisted of the same rough fodder and succulent fodder, however 100% of compound fodder, 50% of grain mass, as well as a mineral additive, polysaccharides, propylene glycol were replaced with hydroponic fodder from barley produced according to the developed technology. The daily diet of the experimental group was 80.6 rubles cheaper and the quality indicators were not significantly higher in the control group.

During the entire research period, milk productivity was recorded by means of control milking (once in every 10 days), fat mass fraction, milk protein content, digestibility of nutrients in rations, morphological parameters of blood of lactating cows during lactation at 70, 150, 250 days, and also milk production coefficients, biological usefulness of milk and biological efficiency of cows were calculated.

Milk yield is the main criterion by which the effectiveness of the use of the studied additive was assessed according to the proposed technology. During the entire research period, milk production was recorded by means of control milking (every 10 days). The data on milk productivity of cows for 305 days of lactation are presented in Table 1.

During the assessment of the consumer qualities of milk, along with the physicochemical properties, an important place is given to the definition of biologically regular relationships between the live weight and the level of productivity. According to this, the coefficients of milk production, biological value of milk and biological efficiency of a cow were calculated.

Consequently, hydroponic green fodder (HGF) produced according to the developed technology contains the required nutrients that contribute to the decomposition of proteins, fats, carbohydrates into easily digestible organic components (amino acids, fatty acids and simplest saccharides) which are simpler in structure and completely replaces compound fodder, mineral supplement in the diet of milking cows and allows a cost saving.

Digestibility is one of the primary indicators of the diet supply with the optimal amount of a particular nutrient.

The data on the average daily nitrogen balance is of particular interest, since the productivity of ruminants largely depends on the supply of their diet (Table 3).
The intensity of conversion of nitrogenous substances of fodder into body proteins depends on the quality of the balance of the diet in terms of the quantity and quality of trace elements calcium and phosphorus. They are involved in the absorption, transport and metabolism of organic substances. The average daily balance and the use of calcium for production in the body of cows is presented in Table 4.

The experiments showed that the indicators of calcium balance in the studied groups of animals are positive. According to the amount of calcium taken with food, the experimental animals, depending on the quality of the diet, had some differences. In comparison with the control group, the animals of the experimental group took calcium more by 2.98 g, or 2.01%. Animals receiving hydroponic green fodder as part of the diet excreted less calcium through the gastrointestinal tract. Thus, the excretion of calcium with faeces in cows of the experimental group was 50.2% of the accepted value, versus 54.8% in the control group. There were significant differences in the amount of digested calcium.

The balance of phosphorus use in cows of the experimental group in comparison with the control was 2.33 g or (30.2%) higher.

The indicators of the coefficient of phosphorus utilization in the experimental group exceeded this indicator over the analogs from the control group by (3.16 or (9.2%). Therefore, 100% replacement of compound fodder with hydroponic green fodder from barley in the diets of feeding experimental lactating cows contributed to higher deposition and use in the body of nitrogen, mineral elements (calcium, phosphorus), which ultimately had an impact on the increase of the milk production of cows.

Normally, haematological parameters react most quickly, which, in turn, are closely related to the resistance of the animal’s body and milk productivity, since during lactation a significant amount of milk is delivered to the lacteous gland with blood. Thus, it was found that the studied indicators of the morphological composition of the blood of cows were within the physiological norm at all periods of lactation (Table 6).

We should note that a higher content of formed elements of erythrocytes, haemoglobin, leukocytes, lysozyme activity, calcium, inorganic phosphorus, carotene in the blood of lactating cows of the experimental groups during lactation was 70,150,250 days. This indicates to a more intensive metabolism in their bodies and a positive effect of hydroponic green fodder produced from barley in the diet of dairy cows on the digestibility of protein, fat, fibre, free-nitrogen extract. In addition it indicates to the better nitrogen utilization and calcium and phosphorus assimilation.

Thus, the production of hydroponic fodder based on new technology allows providing animals with a high-quality supplement with high protein and energy value. Its use significantly improves the quality of the diet and the resulting milk. In addition it makes it possible to solve the problem of animal health, especially in farms that use highly productive breeds and reduces the cost of fodder. 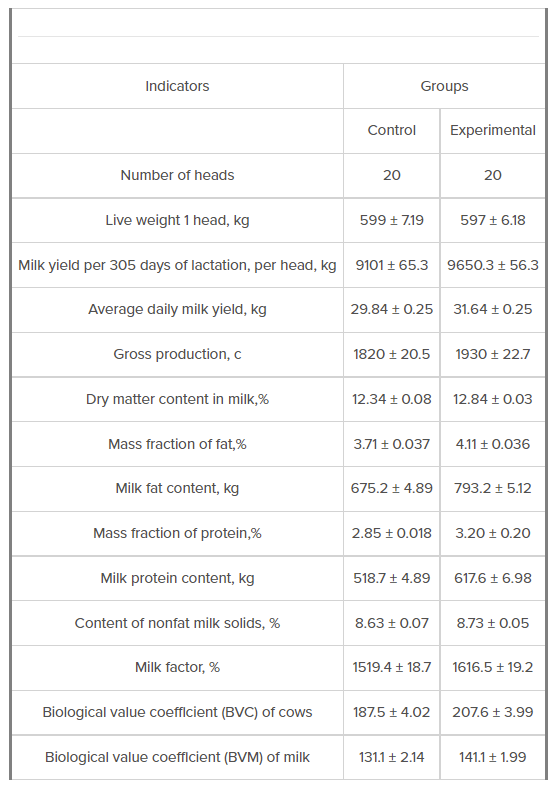