It can be concluded that 1.50 – 2.25 kg of fodder produced in a Fodder System will adequately replace at least 85% of the concentrate in the diet of a store lamb and produce viable weight gains as normally expected in a lamb of that age.

During March 2012, a sheep farmer agreed to run a trial on his lambs using mats of fresh sprouted barley fodder produced with a Fodder System, to replace a portion of his concentrate ration. When the farmer was happy that the system was running consistently, and the sheep were familiar with the feed, he split a group of them off from the herd in order to feed them separately, and monitor their performance.

Over the course of six weeks, he fed them a portion of one mat of fodder weighing approximately 8Kg produced from 1.2Kg of barley grain, alongside some concentrate. The farmer fed the sheep according to the parameters outlined in the methods section, and weighed the sheep every two weeks. The data used in this report is that recorded by the farmer.

The results provided by the farmer from sheep on the Fodder Replacement Diet, show that while the concentrate feed level drops the sheep show weight gain levels consistent with that expected from their normal diet. Weight gain normally expected from fattening lambs would be between 0.15 – 0.30Kg/day. When results from sheep on the fodder diet are compared to this standard there is no difference in productivity between them.

This confirms that the fresh sprouted barley fodder produced by the Fodder System is capable of replacing the concentrate ration in a sheep’s diet without detrimentally affecting their productivity. A longer term trial would be necessary to evaluate the health benefits provided by the feed and benefits to the business as a result of healthier stock.

The technical information on feeding livestock recommends feeding a specific amount of dry weight of feed, a percentage of the animals live body weight. This is something that all farmers follow, and for the most part provides farmers with good productivity from their livestock1.

Where feeding fresh fodder produced in a Fodder System is concerned, the main concern for farmers is the claim that 1 mat of fodder will replace 3-4Kg of concentrate feed. One mat of fodder weighs approximately 8Kg wet, produced from 1.2Kg of barley seed, and the concern is that the drop in dry weight fed will result in a decrease in productivity.

Another issue that farmers have with feeding fresh fodder is that they believe the level of nutrition won’t be as good as that in concentrate feed. This report contains feed analysis reports which show the level of protein available within fresh sprouted fodder. Coupled with the fact that some vets support the idea that the live fresh feed improves the digestive performance of the gut, this means that the animal actually digests the rest of their diet more efficiently due to the addition of fresh fodder to the diet2, 3.

A farmer who was interested in the potential of the feed, was willing to trial it on his sheep. For a period of six weeks 21 lambs were separated from the herd completely. They were then fed 4 mats of fodder, as well

as ad-lib silage and some all-purpose concentrate. The farmer holds around 200 sheep in total. The lambs, 9 months old, are normally out at pasture during the day, and brought indoors during the afternoon, when indoors they have access to ad-lib silage.

Replacing the concentrate in the diet of a sheep with approximately 2Kg of fresh sprouted barley fodder will provide sufficient nutrition to enable the lamb to increase its body weight in a similar timescale to a normal concentrate based diet.

Housing – The herds are separated and kept in different sheds of brick construction with metal roofing.

Sheep – The poorest 21 lambs were selected to be placed on the replacement diet. They varied in weight from approx. 18Kg to 24Kg at selection. Average weights are taken from the other lambs to compare the effectiveness of each diet.

Late Lambs – Born in May or June, they are used to clean the grass left on the grazing pasture over winter plus silage. They are roughly 20Kg in weight when taken into housing for fattening towards the end of January. They are then usually fed concentrate and silage until ready for sale at approximately 45Kg in April. The lambs are sold at approximately 11 months old. 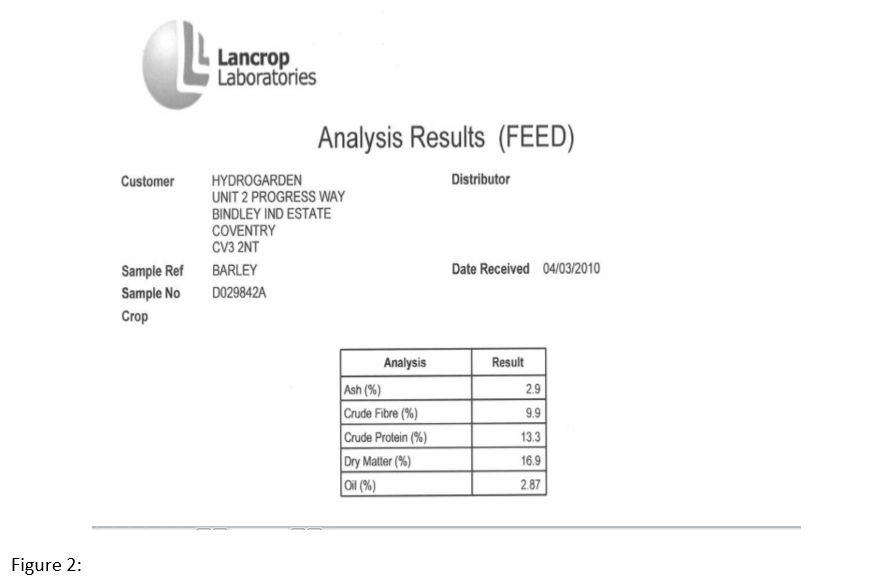 The table below contains details of the lambs used in the trial:

For the purposes of analysis and presentation of some results, the herd was split into 3 groups based upon their weight at the start of the trial. Demarcation is as follows:

Figures 4 and 5 represent the weight gain of the herd on the Fodder Diet over the total period of the trial. The graphs show a steady increase in weight over the period of the trial, with total herd weight increasing from 715Kg to 1080Kg, and individual weights increasing from between 30-38Kg to 45-55Kg, over the total six-week period. The results give weight gains consistent with that normally expected from fattening lambs fed on a concentrate and silage diet.

Figures 6 and 7 represent the variation in weight gain of the herd, and each group for each two-week period between weighing. The graph shows a reasonable increase during period 2 between 05.03.12 – 20.03.12, however during this time there weren’t any changes in diet or housing. External temperatures weren’t monitored, and temperatures were variable. The group benefiting the most during this period is Group 1. While Group 3 show a more even weight gain during the first three periods.

During period 3 weight gains lower, closer to the level in period 2.

During period 4 there is a very marked increase in weight gain. This increase coincided with the increase of the weight of fodder fed to the herd from 1.5Kg/head to 2.25Kg/head. Clearly the increase of 0.75Kg/head/day wet weight (0.11Kg/head/day dry weight) has increased the available nutrition to the level where the lambs are able invest the protein and starch into building muscle tissue.

The Herd average figures show a more balanced increase and decrease between periods 2 and 3, while reinforcing the increase during period 4.

Figure 8 represents the daily weight gain per group during each feeding period. This graph also shows how Group 1 have benefited the most during period two, and when the fodder is increased in period 4, both Groups 2 and 3 benefits hugely while the weight gains in Group 1 remain more consistent.

Figure 9 represents the calculation of diet cost against weight gain. The graph shows that over time the cost per Kg gained decreases, but the graph pattern also reflects that of the overall weight gain as the diet cost didn’t change during periods 1 to 3. Therefore, suggesting either changing temperatures resulting in the lambs having to spend more energy in temperature regulation, or that perhaps as the lambs are growing they are better able to regulate their body temperature and invest more energy in weight gain, meaning the diet cost becomes more efficient.
The increase of fodder during period 4 has obviously resulted in a decrease in the cost/Kg gained. However, the actual cost of the diet in real terms is an increase in £0.06/head/day. If we compare this with the increase in weight gain levels, the average Kg/day weight gain results in Figure 7 show an increase of 0.25Kg/day. This represents excellent value in the terms of a return on investment in the feed as an increase in cost of £0.06 has resulted in the weight gain increasing by 60% on period 2 and 100% on period 3.

Figures 10 and 11 represent the comparison between average Kg/day weight gain, and the real term cost of the weight gain regarding the diet. Figure 10 shows the results for each individual, while Figure 11 shows the average result for the whole herd over the period of the trial. While we have seen how the weight gain has varied during the different feeding periods, the daily gain figure for the whole trial period, 0.3Kg, is consistent with what is expected from a normal concentrate and silage diet.

The difference in cost between a Fodder Diet and a Standard Diet will vary from farm to farm due to the variation in the cost to the farmer of making the silage, and the price they pay for their concentrate. During this trial we have replaced 1.7Kg of concentrate with 2.25Kg of fodder.

In fact, for the 6 week period of the trial, the farmer has saved a minimum of £200 on the herd of 21 lambs included in the trial. If these figures were extrapolated over a 9-month feeding period, and for a herd of 200 lambs the potential saving would be approx. £12,400. This shows how significant the savings could be.

Based on the testing of our hypothesis, we can conclude that 1.50-2.25Kg of fodder produced in a Fodder System will adequately replace at least 85% of the concentrate in the diet of a store lamb and produce viable weight gains as normally expected in a lamb of that age.

This feeding system is being used in both Australia and United States of America, where farmers successfully feed their sheep with fodder produced in a Fodder System with excellent results, and previous trials have proven improved performance by including fresh sprouted barley in the sheep’s diet.

Despite the reduction in dry weight matter fed, the lambs have performed well, and this may be because of a more balanced digestive system, leading to increased digestive performance. The results of the trial confirm there is no detrimental effect in the productivity of the lambs when fattening on a diet based on fresh fodder. Either in the amount of weight gained, or the time taken to gain adequate weight ready for sale. The results section has highlighted the potential benefit from a business perspective, with reduced feed costs leading to increased profits when lambs are sold as the feed can be produced considerably cheaper in a Fodder System.

A possible extension of the hypothesis would be the effect of adding higher protein seeds, such as field beans, which would increase the available protein and potentially increase the weight gain within the same period for marginally increased costs.